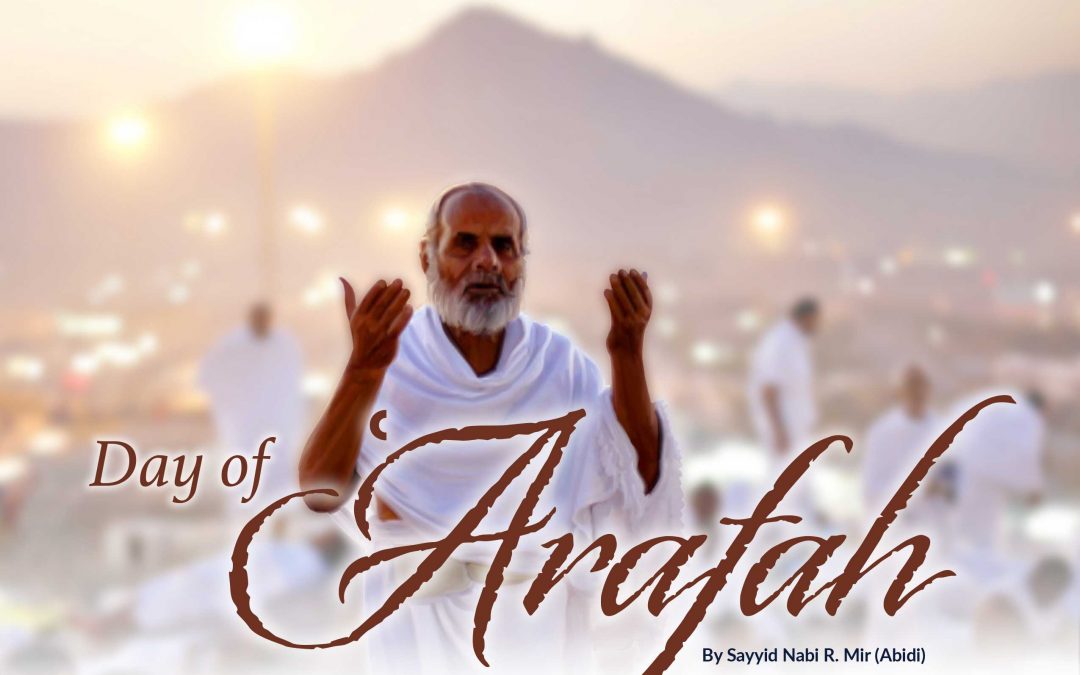 Eid ul-ʿAḍḥā is the celebration that marks the completion of the Ḥajj pilgrimage on the 10th of Dhul Ḥijjah in Mecca. This pilgrimage is an obligatory one upon every able Muslim, where Muslims of every race and color from all over the world unite at the Kaʿbah (the sacred house of Allah), established by Prophet Ādam (ʿa). This Eid marks the accomplishment of the Ḥajj rituals and celebrates the blessings of Allah given to the ḥujjaj (pilgrims) after the completion of Ḥajj, in the same way that Eid ul-Fiṭr marks the accomplishment of the fast.

The Day of ʿArafah is the day before Eid ul-ʿAḍḥā and  is filled with prayer and supplications to Allah. Those performing the Ḥajj ritual will stop on the plains of ʿArafah a little ways outside of Mecca and spend the day in devotion to Allah. It is a place of maʿrifah, deep understanding and learning. One can attain the highest level of maʿrifah and ʿirfān and deep recognition of oneself there.

ʿArafah is a key part of Ḥajj and there is no exchange if one cannot be in ʿArafah on the ninth of the month from the time of afternoon prayer to the sunset prayer. For other parts of Ḥajj, if a pilgrim misses something, there is a way to make up for it. But if they miss ʿArafah, their Ḥajj cannot be counted as complete; the time between the two prayers is especially important and special–it has a specific mercy that the pilgrim should reserve their energy for. This particular piece of land has blessings because of the events that occurred here–including the sacrifice of Prophet Ibrāhīm  (ʿa), the meeting of Prophet Ādam (ʿa), and it is where thousands of other prophets were granted propethood and given the message of Islam. It is also noted that even Imām al-Mahdī (ʿaj) is confirmed to be in ʿArafah on the ninth between the time of the afternoon and sunset prayers.

At the end of their journey towards each other, they met in ʿArafah on the mountain of Raḥmah—Mercy. This mountain is named Raḥmah because when Prophet Ādam (ʿa) was asking for forgiveness and doing ṭawbah (repentance) for his mistake, Allah revealed to him His Asmāʾ al-Ḥusnā, His All-Beautiful names. Through this, the mercy of Allah was revealed in the form of a duʾā: 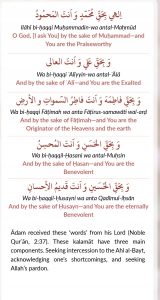 Prophet Adam (a) received these ‘words’ from his Lord (Noble Quran, 2:37). These kalamat have three main components. Seeking intercession to the Ahl al-Bayt (a), acknowleding one’s shortcomings, and seeking Allah’s pardon. On the plains of  ʿArafah stands Jabal ar-Raḥmah (the mountain of mercy) where Prophet Ādam and Lady Ḥawwāʾ (ʿa) met, and at the foot of which they supplicated and repented. All the prophets had najwā or conversed intimately with Allah on this mountain. It is a piece of heaven because Allah’s mercy falls here.

“We said, ‘O Ādam, dwell with your mate in paradise, and eat thereof freely whencesoever you wish; but do not approach this tree, lest you should be among the wrongdoers.’”

Then Satan caused them to stumble from it, and he dislodged them from what they were in; and We said, ‘Get down, being enemies of one another! On the earth shall be your abode and sustenance for a time.’

“Then Ādam received certain words from his Lord, and He turned to him clemently. Indeed He is the All-Clement, the All-Merciful.”

“We said, ‘Get down from it, all together! Yet, should any guidance come to you from Me, those who follow My guidance shall have no fear, nor shall they grieve.” (Noble Qurʾān, 2:35-38)

Allah asked Prophet Ādam (ʿa) if he wanted to see his status in the eyes of Allah before and after he asked for forgiveness. Prophet Ādam (ʿa) was surprised that his status was elevated so much after he asked for forgiveness due to the trials and tribulations he experienced. His previous status was given by Allah but this one was a status he had earned. Allah then asked if Prophet Ādam (ʿa) would like to go back to Heaven, Ādam (ʿa) said that he would rather stay on this Earth with Lady Ḥawwāʾ because they had seen that only in this dunyā (world) did they have the possibility of reaching such a high status and optimizing their potential. There, they also established the first family system.

After this, Prophet Ādam (ʿa) and Lady Ḥawwāʾ walked to mashʿar (a religious site in hajj) and made a covenant with Allah, saying, “O Allah, from now onward since you gave me this privilege of khalīfatullāh (the vicegerent/representative of Allah), help me fulfill this duty. .” After this, the pair continued to Minā,  then Mecca. In Mecca, Allah commanded Prophet Ādam (ʿa) to make the Kaʿbah, the house of Allah, and alongside it Prophet Ādam (ʿa) should make his own house to live with his family. Prophet Ādam (ʿa)  now found complete tranquility as he established Allah’s house and his family’s home side by side in tawḥīd (Divine Unity) and submission.