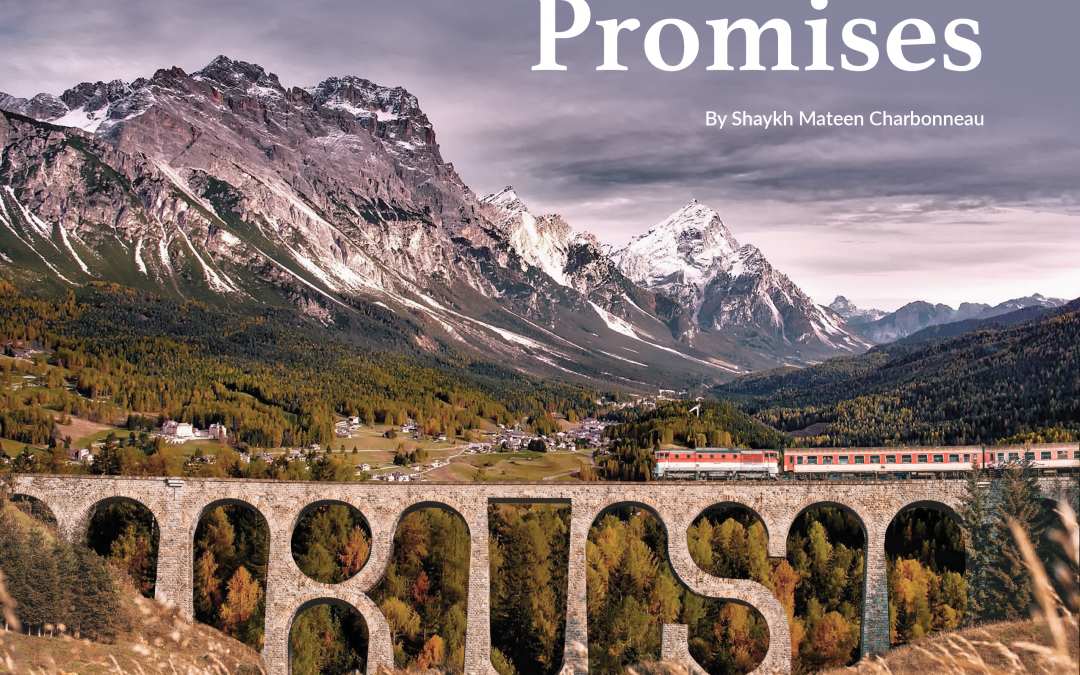 “O’ you who believe, stand by your contracts (and obligations)…”

We have been commanded by Allah to fulfill our obligations: we are meant to be people who honor a trust given to us. Part of honoring a trust is the covenant we have made with our Creator when we accepted this path of Islam. Although it may be difficult, we should try our best to keep the promise we made to follow the guidance of the Qurʾān and the Ahl al-Bayt (ʿa).

“When you are in the ships, and they sail along with them with a favorable wind, exulting in it, there comes upon them a turbulent wind and waves assail them from every side, and they think they are besieged, they invoke Allah putting exclusive faith in Him, ‘If You deliver us from this, we will surely be among the grateful.’ But when He delivers them, behold,
they commit violations on the earth unduly! O mankind! Your violations are only to your own detriment…” Qurʾān 10:22-23

We find ourselves surrounded by problems that can be likened to the storm mentioned in the Noble Qurʾān, as we call to Allah to save us. The question we must ask ourselves after receiving His help is whether we will return to our previous behavior, neglecting Allah and forgetting our promise. We need to honor the covenant we made with Allah and uphold our religious duties by following the Qurʾān and the Noble Prophet (ṣ) to the best of our abilities.
There is a trust between people that also needs to be honored. Imām Bāqir (ʿa) said: “The believers are brothers of each other. They should not insult, deprive, or mistrust each
other.”1 A quality of being a believer is that we should be able to trust each other. If we break the trust of others, this is actually a sin and it is one of those sins which blocks our
prayers from being answered. Imām Ṣādiq (ʿa) said: “Whoever has these three characteristics
is certainly a hypocrite even if he offers prayers and fasts: he who lies when he speaks, breaches his promises, and when he is entrusted with something, he betrays (that trust).” 2
These signs mentioned by the Imām (ʿa) are the characteristics of being a hypocrite. We see that violating trusts is one of the things on that list. Not fulfilling the trust is not only a sign of hypocrisy, but it also brings about destruction to one’s life. For example, it could very well ruin a friendship if one does not honor a secret he is entrusted
with.
Imām Alī (ʿa) said: “If breach of trust makes its appearance in
a house, it ruins that house and deprives it of prosperity and
blessing.” 3

This shows that one secret to life’s prosperity is that we never breach a trust. People will always want to conduct business and trade with a person known for being honest and trustworthy because of their reputation for good morals. However, society will avoid one who is known for dishonesty, breaking promises, and breaching trust.
Imām Ṣādiq (ʿa) said: “Allah never appointed anyone to Prophethood unless he was honest and trustworthy. And we must return what we are entrusted with to its owner whether
he is a good- doer or an evil-doer.”4

As we know the Messenger of Allah (ṣ) was called al- Amīn (the Trustworthy) even by his enemies. It is noted that when the disbelievers would leave town, they would entrust the Noble Prophet (ṣ) with their belongings due to his character. We must strive to emulate the best example that Allah has sent for us to follow by putting into practice
his ethical teachings.
Imām Sajjād (ʿa) said: “By He who has sent Muḥammad as a prophet of truth! Even if the killer of my father, Ḥusayn bin ʿAlī, entrusts me with the sword with which he killed my father, I will surely return it back to him.”5

Regardless of a person’s faith we must keep our word. We cannot take advantage of people just because they are disbelievers. We have to remember that our actions with people will either attract them toward Islam or push them away from Islam. May Allah protect us from setting a bad example for mankind and allow us to follow the best of examples which we have in Prophet Muḥammad (ṣ) and his family (ʿa).